Vim is a great text editor if one takes a bit of time to learn how to use it properly. There's quite enough documentation on how to use Vim correctly, and efficiently so I shan't cover that here. vimtutor is an excellent resource to begin at.

Similarly, LaTeX is a brilliant documentation system, especially for scientific writing if one takes the time to learn it. Unlike the usual Microsoft Word type systems, LaTeX is a set of commands/macros. Once the document is written using these, it must be compiled to produce a PDF document. It may appear daunting at first, but after one is familiar with it, it makes writing a breeze. Now, there are a editors especially designed for LaTeX, but given that I use Vim for about all my writing, I use it for LaTeX too.

On Fedora, you can install Vim using DNF: sudo dnf install vim-enhanced vim-X11. I install the X11 package too to use the system clipboard.

To begin with, there are a few command line commands that one can use other than the necessary latex, pdflatex, bibtex, biber, and so on commands:

One can use any text editor and then these utilities to improve their LaTeX writing experience.

On Fedora, install these with DNF: sudo dnf install latexmk /usr/bin/lacheck /usr/bin/chktex /usr/bin/detex diction. (Yes, you can tell DNF what file you want to install too!)

Vim already contains quite a few features that make writing quite easy;

There are a lot of Vim plug-ins that extend some functionality or the other. The simplest way to install plug-ins is to use Vundle. Here are some plug-ins that I use. They're not all specific to LaTeX.

I've also used vim-latex in the past and it's very very good. However, since I have other plug-ins that provide the various functionality that it brings together for many other languages too, I'm no longer using it. Worth a go, though.

The image below shows a LaTeX file open in Vim with different plug-ins in action: 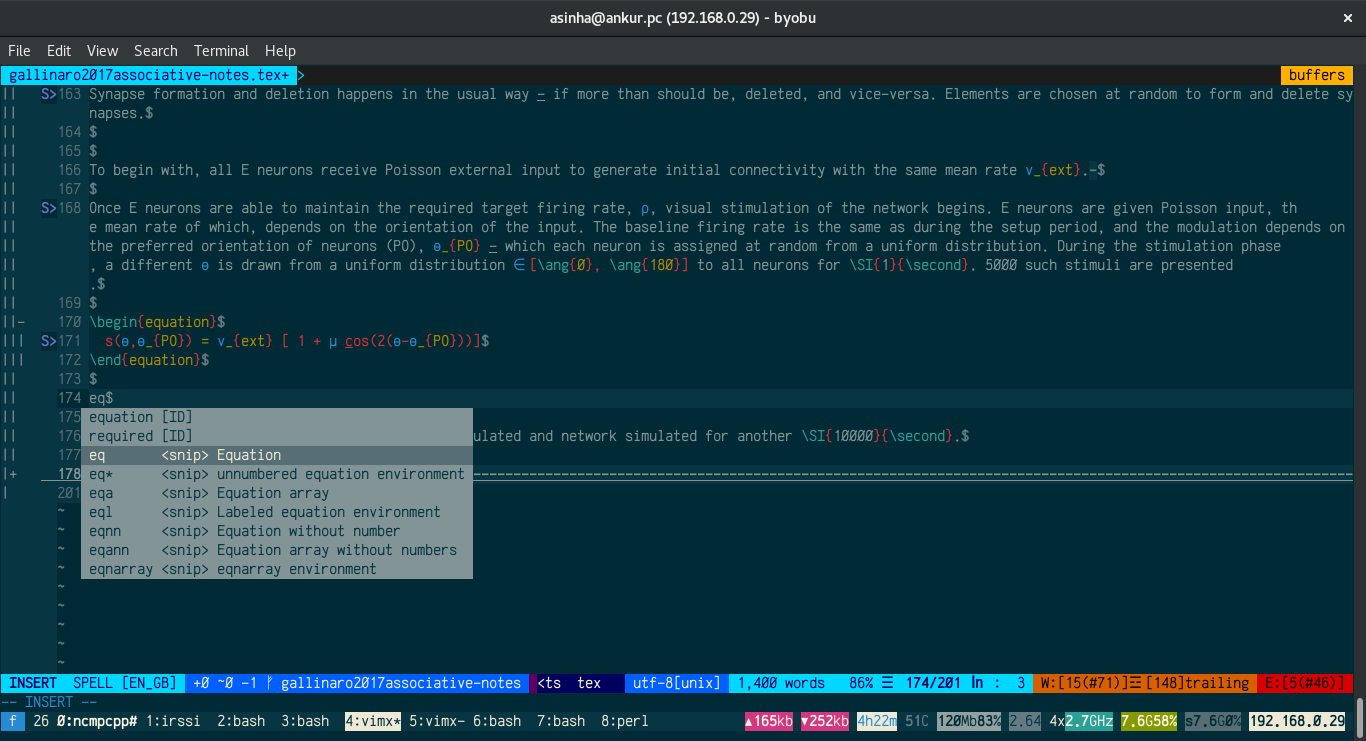 Neat, huh? There is a lot more there that isn't easy to show in a screen-shot. For example, \ll will compile the LaTeX file; \lv opens the generated PDF file in a PDF viewer, Evince in my case; \lc will clean the directory of any temporary files that were generated while compiling the document.

I keep all my vimfiles on Github. Feel free to take a look and derive your own. I tweak my configuration each time I find something new, though, so it may change rather frequently. Remember to read the documentation for whatever plug-ins in use. They provide a lot of options, lots of shortcuts, lots of other commands, and sometimes setting them up incorrectly can cause vim to behave in unexpected ways.